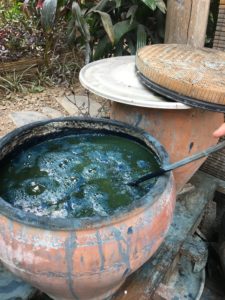 When you say indigo, the first thing many people will think of is blue – jeans blue. (Or if you’re me, you’ll think first of a seventeenth-century recipe to make decorative blue prunes from wax with indigo. Occupational deformation.) But historically, indigo has been used in many more ways, and to make more dye colours than just blue, as I recently discovered. Today, most jeans are died using a synthetic blue dye, but indigo dyes, made from some of the over 750 species of the genus Indigofera as well as from some other plants, have been used to dye textiles for at least 6,000 years, while other subspecies of Indigofera were traditionally used as analgesics with anti-inflammatory properties.

The term ‘indigo’ according to the OED started to occur from the sixteenth century onwards in various European languages to denote blue dyes from India (or east Asia more generally), but can now also refer more generally to dyes, violet-blue light, or blue hues. It might be argued that the term only really applies to dyes created from Indigofera subspecies, while it could also be said that indigo is any dye created from plants through the decomposition of the glucoside indican, which exists not merely in the indigo-plant, but in woad and various other plants too.

While on holiday in Luang Prabang, Laos, I took a weaving and dying workshop with Ock Pop Tock, an organization that was established to preserve the traditional Laotian craft of making hand-loomed textiles. There, I discovered that there is more indigo besides Indigofera, and that one indigo plant can give many more dyes than just blue. They also have a wonderful informative website on natural dyes. At Ock Pop Tock, the plant species used to create indigo dyes is Persicaria tinctoria, or long leaf Japanese indigo, a plant indigenous not to Japan but to China, Vietnam, and Laos. Depending on how the leaves are treated, it can be used to create blue, green, black, and mauve.

Using the fresh leaves creates a green dye, fermenting them for at least five days and adding limestone as a mordant gives a blue dye. Traditionally, the Lao believed that the dye was female, and that it fermented because it attracted a male spirit. To coax the spirit, the pots containing the dye would be dressed in a skirt, and a knife placed on top of the lid to ward off evil spirits that could ruin the dye. The fermentation is actually a naturally occurring oxidation process, with atmospheric oxygen as the oxidant. Regular stirring ensures the process continues. The longer the indigo mixture is left to ferment, the darker it turns. If this mixture is boiled, it turns black. Alternatively, a rare indigenous plant, mak bow or bow vine, can be added to the blue dye to create mauve.

As part of the half-day workshop, I got to dye a silk scarf with a dye of my choice. I love green hues and wanted to make a dye from start to finish, so I chose to dye my scarf ‘indigo’ green. This was, apart from some pretty intense pounding of leaves, surprisingly easy. I got to pick freshPersicaria tinctoria leaves in the beautiful garden, washed them, and mashed them vigorously in a mortar for about five minutes. Then I transferred the mashed leaves into a tub, added some cold water and then the raw silk scarf. After kneading the dye into the fabric for a couple of minutes, I could rinse my scarf and hang it to dry. The end result is a beautiful soft green scarf, that is not just a souvenir, but a tangible reminder of the traditional Laotian knowledge about natural dyes preserved and shared at Ock Pop Tock.

One thought on “INDIGO OR NO INDIGO?”