Last Saturday, the Travel section of my Dutch newspaper, the Volkskrant, featured a short article on ‘dark tourism,’ the phenomenon of people leisurely visiting places that are reminders of death, suffering or the macabre. Examples are Auschwitz, the Anne Frank house and graveyards, but also the Body Worlds exhibitions. According to Philip Stone, director of the recently established Institute for Dark Tourism Research (iDTR), dark tourism is increasing in popularity, something he ascribes not only to marketing but also to secularization. As churches empty, people seek other places to think about life and death, good and evil, he suggests in the article.

Visitors can be seen strolling around and pointing out things to each other. The dissected body on the table is unlikely to have been there during the summer tourist season in reality, as dissections were normally only performed during the cold winter months.

English and French, and paying visitors could join guided tours. These visitors could of course use the opportunity to learn something about human anatomy, but they were also treated to stories relating to the exhibits, such as that of the skeleton of a woman who had been condemned to death for theft. This Catherine of Hamburg allegedly bought a length of ribbon at a market in Amsterdam, measuring from one ear to the other – a standard length. However, after the purchase, she claimed that one of her ears was nailed to the pillory in Hamburg. [1] Although visitors found stories like this one hard to believe sometimes, most of them did not seem to mind a little stretching of the truth if there was a moral lesson or just entertainment.[2] 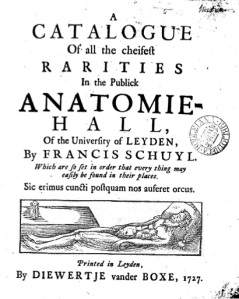 Title page of an English visitor’s catalogue to the Leiden Anatomical theatre, 1727.

Yet in the course of the eighteenth century, the attraction of this kind of ‘dark tourism’ was changing, at least in the case of the Leiden anatomical collections. For example, an English visitor who described his stay in Leiden in 1775 stated that “…you must not fail to see the Anatomy-chamber”, but adds this is mainly because that is where “they preserve the money of Egypt; Pagan idols, –foreign dresses, birds from China, &c, &c.” Not a word about anatomical preparations or moral lessons.[3] This indicates that the anatomical theatre to tourists had become a cabinet of curiosities instead of a place to learn about human anatomy and morality. The curators also realized this, and from the last decades of the eighteenth century, the collections were partly handed over to other institutions, such as the newly established museum for antiquities, and the anatomical theatre slowly changed from an open-for-all public attraction into a closed teaching institution.[4]

This story about the Leiden collections shows that what is considered ‘dark’ can change over time, and that the reasons people visit these places vary. Then as now, some want to contemplate life and death or morality, others want to be entertained or learn something about the human body or human behaviour. My guess is that in order for a ‘dark tourism attraction’ to be successful in any time, visitors need to be able to relate to what is on show, or the people whose stories are told by and in that place – hence the massive success of the Anne Frank house and Body Worlds. As long as the story is a universal human one, and credible, visitors will continue to come.

[2] Knoeff, R. ‘The Visitor’s View. Early Modern Tourism and the Polyvalence of Anatomical Exhibits’, in L. Roberts (ed.), Centers and Cycles of Accumulation in and around the Netherlands during the Early Modern Period  (Münster: LIT Verlag, 2011), pp. 155-175, 166-7.

Over the past few months, as I learned more and more about the use of quicksilver in eighteenth-century chemistry and medicine, I became increasingly curious about the origins of all this mercury. The chemistry of the eighteenth century was a science of materials, materials that allowed various ways of inquiry: descriptions were made, technological possibilities explored and philosophical reasoning applied. However, we should not forget that in early classical chemistry, all chemical substances were useful materials produced in mining, metallurgy and pharmacy.[1] So where did a useful chemical material like mercury come from? In his book De Mercurio Experimenta, Boerhaave mentioned that he acquired sixteen ounces of quicksilver for his experiments at ‘the Company at Amsterdam.‘[1]

That must have been one famous company, if Boerhaave only needed to refer to it as ‘the Company at Amsterdam’ in the transactions of the Royal Society. It was indeed. I soon found out that at the time Boerhaave was writing this, the company of the Amsterdam Deutz family had almost exclusive rights to the trade in mercury in the Low Countries, and even in Europe. The most important quicksilver mines in Europe were those in Idria in the Habsburg Empire (now in Slovenia and spelled Idrija).

Copper engraving of Idrija, including the mercury mine, by Janez Vajkard Valvasor (published in his The Glory of the Duchy of Carniola), 1689

In the mid-seventeenth century, the Habsburg emperor monopolised the entire mercury mining and trade business of Idria, and in 1669 appointed a limited number of ‘factors’ in Venice and Amsterdam, who had the exclusive right to trade the imperial mercury. This situation would persist more or less unchallenged until 1741.[2]

The Amsterdam factor was Jean Deutz (1618-1673), a rich merchant originally from Cologne. After his death, first his son Jean (1655-1719) and subsequently his grandson Willem Gideon (1697-1757) took over the factorship. Because of the their monopoly, Amsterdam was the international trade centre for mercury, and the production centre of vermilion (a red dyestuff produced from sulphur and mercury) and mercurial salts in Boerhaave’s time. Although local apothecaries and assayers would also stock mercury, for the relatively large amount of pure mercury Boerhaave required – 16 ounces, which, in today’s weight, would be almost 500 grams -, the Amsterdam company was apparently the most trusted supplier.

However, in Deutz’s perspective, 16 ounces was hardly business. Mercury was used in 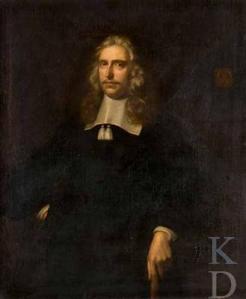 much larger quantities in all kinds of industries, such as felting (done by hat makers who frequently suffered mercury poisoning, hence the expression ‘mad as a hatter’), glass and mirror making and the dye industry. But the price of mercury was largely defined by the demand of the mining industry, as mercury was used to mine gold and silver.[3] Deutz gave massive loans to the Emperor, in return for which he would receive a set amount of mercury each year, which he sold for huge profits. Around 1706, when the Amsterdam monopoly was somewhat shaken by English imports of mercury from China, the sales of eight hundred 150 pound kegs of quicksilver a year still supplied the Deutz company with an annual income of about 225,000 guilders.[4]

[1] Boerhaave, Herman. Some experiments concerning mercury. By J.H. Boerhaave, professor of physick at Leyden. Translated from the Latin, communicated by the author to the Royal Society 1734. (London: J. Roberts, 1734), 16.

[3] Mercury was, and is still sometimes used to extract gold or silver from ores. See http://www.miningfacts.org/Environment/Does-mining-use-mercury/

In September last year, I heard of the Amsterdam Ritman Library or Bibliotheca Philosophica Hermetica for the first time. I had been wanting to see the exhibition ‘Alchemy on the Amstel‘ (until 20 September 2013) ever since, and last week I finally got a chance. On a sunny afternoon I cycled to the library, hidden away in a side street of the Prinsengracht, a stone’s throw from the Westerchurch.

In stark contrast to the hustle and bustle outside, just metres away from the throngs of tourists queuing for the Anne Frank house, the Ritman Library is an oasis of silence. Founded by the Amsterdam businessman and maecenas Joost R. Ritman (1941), the library holds a unique collection of hermetic books and manuscripts with a focus on the Christian tradition. The collection covers areas as diverse as alchemy, Rosicrucian works and Gnostics, from the Middle Ages to the present day.

The current exhibitions at the Ritman Library, ‘Alchemy on the Amstel: On Hermetic Medicine in the Golden Age of the Dutch Republic’ and ‘A Curious Tsar: Peter the Great and Discovering the Secrets of Nature in Amsterdam’ (in conjunction with the exhibition ‘Peter the Great: an Inspired Tsar’ in the Amsterdam Hermitage), are small but rich. They give the visitor a quick but thorough insight in Amsterdam as a centre of trade and knowledge in the seventeenth and early eighteenth century. Concise bilingual catalogues help the visitor to put the works on display in context.

Although this is a library exhibition, there are not just manuscripts, books, and other printed works on display. In one of the display cases, a small cup and a stony clump of material with a metal-like shimmer caught my eye. They turned out to be an antimony cup and a lump of antimony (Sb2S3), a lustrous grey metalloid often found in ores together with either sulphur or mercury. This combination appealed to alchemists, as sulphur and mercury were considered the basic alchemical elements. Moreover, as antimony could cleanse the most precious metal, gold, from impurities, alchemists reasoned it could also cleanse and cure God’s most precious creature, created after his own image: man.

Hence Paracelsus (1493-1541) and many of his followers advocated the use of small amounts of antimony in iatrochemical drugs, although they were well aware of the fact that it is highly poisonous. Antimony cups like the seventeenth-century one on display at the Ritman library were used since antiquity to make antimonial wine by soaking regular wine in it for one or more days. This antimonial wine was a tried emetic, but antimony cups were forbidden in England and France for much of the seventeenth century as the use of a wine too acidic would result in a lethal concoction. This prohibition was sometimes circumnavigated by creating antimony cups from tin with a small amount of antimony.[1] In France antimony cups became legal once more in 1658, after Louis XIV was cured from typhoid fever with antimonial wine.[2]

The aim of this this exhibition, dispelling some of the misconceptions surrounding alchemy with a general audience, is certainly met. And for historians of alchemy and chemistry, the Ritman Library is a true treasure trove. Like many other cultural institutions, the library faced major financial challenges over the past years. All the more reason to support it by paying a visit – you will not be disappointed.