The (human) reproductive organs long were a source of wonder for physicians: exactly how did they work? But answering this question required the dissection and preservation of reproductive organs in anatomical collections – a practice that for a long time no one seemed to be eager to contribute to. Anatomical dissection was not something people signed up for voluntarily until the twentieth century; in the Middel Ages it was considered an extra punishment on top of capital punishment, and having ones intimate parts displayed in an anatomical collection was not something people aspired to. Especially the study and collecting of female reproductive anatomy by male medical scholars was controversial in the early modern period – Katherine Park, Lucia Dacome and Rina Knoeff have written about this in the recent past.[1]

However, the study of male reproductive anatomy neither was – and is – without controversy. Darren Wagner is currently working on a thesis on the study of both male and female anatomy in the eighteenth century, and like Rina Knoeff, points out how genital preparations could affect an anatomist’s reputation in the eighteenth century. Yet genital preparations were essential for the study of reproduction, as can also be seen in the collection of the eighteenth-century London surgeon and anatomist John Hunter (1728-1793), eighty preparations of organs of generation of both humans and animals can be found, these can be viewed online by searching for ‘penis’ and ‘Hunter’ in the museum database.

As Darren Wagner has also noticed, we are still not entirely comfortable with the study of reproductive organs – although it appears to me this discomfort is evoked in particular by preparations of human reproductive organs that are still recognizable as such. My guess is that very few people will blush or chuckle over a newspaper article on, say, new IVF techniques. Yet if it becomes more concrete, as it does in the documentary The Final Member, discomfort is lurking closer. 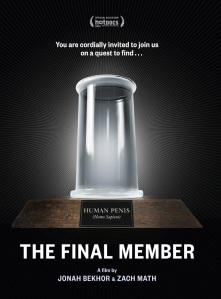 Film poster for ‘The Final Member’

This documentary follows the quest of Icelander Sigurður “Siggi” Hjartarson to obtain ‘the final member’ to complete his life work: the Icelandic Phallological Museum.  When the documentary was made, in 2012, the museum already housed an impressive array of mammalian members, from that of a field mouse to the colossal sperm whale. The film shows how shortly after one another, two voluntary donors offer their member for the collection. Both feel it would be a great honour to have their member preserved for eternity in Siggi’s museum. It is this attitude that is probably still most stunning to many viewers, and that would likely have been inconceivable to the involuntary eighteenth-century ‘donors’ to anatomical collections like those of John Hunter.