For four years, I worked on my PhD dissertation about eighteenth-century anatomical preparations. Those preparations look pretty, many quite fragile, dangling in preservations fluid from a single horsehair in a glass phial. I was particularly interested in why these preparations were made, and how. The ‘why’ question can be answered fairly well by studying the preparations and related sources, such as contemporary letters, books, catalogues and lecture notes. The ‘how’ question though, is a completely different matter. Techniques to create lasting wet anatomical preparations were first developed from the late seventeenth century, and the first anatomists doing so were not too keen on everyone knowing their secret. That way, a good lasting preparation remained a sought after commodity. 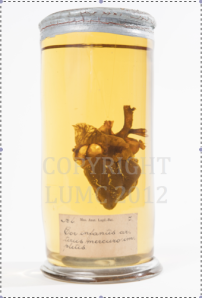 Yet this secrecy eventually disappeared as more and more preparations were required for research and teaching, and by the end of the eighteenth century, quite detailed handbooks on making anatomical preparations were available, such as Pole’s 1790 Anatomical Instructor. But does that mean it is easy to understand how an anatomical preparation was made in the eighteenth century? Not at all. Because these handbooks do describe materials and processes, but they also stress that the main things required are practice and patience. They are like cookbooks with very complicated recipes: you can have the book, all the ingredients and equipment described, follow the instructions minutely, and you can still mess up dinner massively because you are an inexperienced cook.

Like any art, any practical skill, creating an anatomical preparation is something you can only do successfully if you practice patiently. To gain a better understanding of this practice, at some point my colleagues and I decided that we had to try to create a preparation ourselves, using the eighteenth-century handbooks and materials that resembled those listed as close as possible. That is how we ended up trying to inject sheep hearts with warm blue and red wax on two February afternoons in early 2012. It turned out to be even harder then we anticipated. The wax had to be very hot in order not to harden straight away, so we kept the hearts in an au-bain-marie, but the water had to be so warm we almost burned our hands. According to the instructions, injecting the wax through particular veins, it should eventually also be pushed into the smallest blood vessels, but whatever we tried, it didn’t happen. 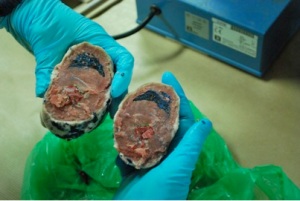 And then I did not even mention the difficulties we had obtaining the right ingredients for the wax masses and mixing them according to the recipes, the stink of the hearts and the hot turpentine, the difficulty we had discerning the right veins for injection and tying of the others to prevent the wax from leaking out again. If we were already having so much trouble doing this in an age of electric lighting, refrigeration, and the internet, how difficult must it have been for an eighteenth-century anatomist? I already admired the old preparations for their refined details, and that admiration only increased because of our own experiment. What this shows is that trying to reproduce historical experiments and production techniques enhances our understanding of historical practices and objects enormously, in a way that is impossible if you only study written and visual sources. Sometimes, history research has to be very hands-on.